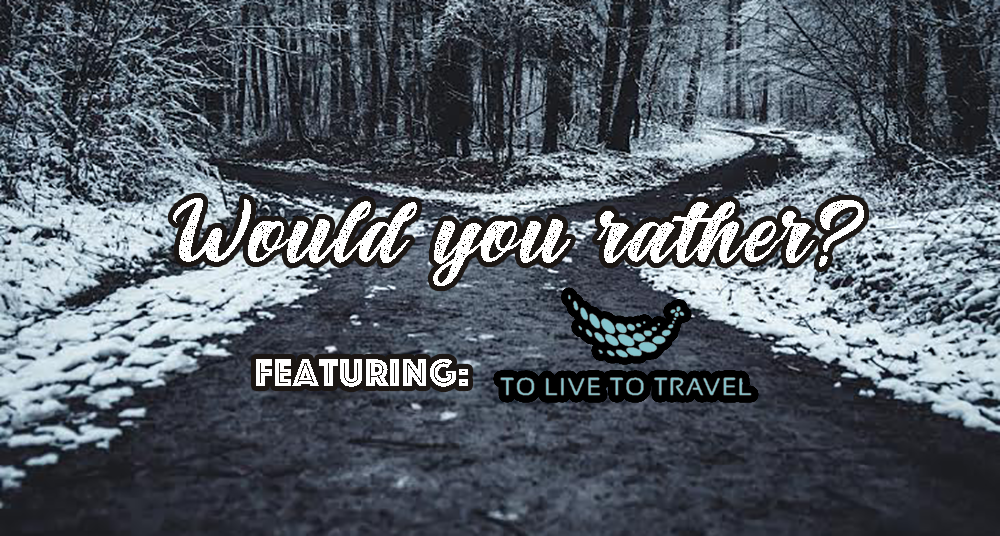 10 Of The Best Brewpubs In Portland

WOULD YOU RATHER? A series of interviews with Travellers, Bloggers, Travel Bloggers and just generally interesting people. We’ll ask a series of difficult travel questions with two possible answers. They’ll tell us what they would choose and why.

For this Article we have Marta from To Live To Travel whose love for travelling has grown immensely since a trip from Poland to London as a teenager. Not content with just travelling the world and blogging though Marta has set some lofty goals for herself. The first is to climb to the highest peak on each continent, the challenge known as 7 Summits; and the second to reach the highest peak of each European country, which Marta calls The Crown of Europe.

With currently 4 out of the 7 continent summits scaled and 17 out of the 48 European Summits, Marta is well on her way to completing these very impressive goals. If anyone wants to join Marta on one of the European Summits you can find more information on the latest trip on her site or meet up group.

Now to the questions …

Would you rather run the London or New York marathon?
Hmm … this is a harder one. Because I live in London, I would probably say New York to make it more special. Though London marathon wouldn’t be bad at all.

Having completed both, if you were offered a completely free trip, would you rather climb Denali the highest point in North America or Aconcagua the highest point in South America again?
That would really depend on my fitness level. To prepare for Denali you need to sacrifice a lot. It took me 9 months of training, no going out or socialising, just hard gym sessions, twice a day, plus carrying a heavy backpack everywhere I could. So if I wasn’t in a good fitness state I would go for Aconcagua. Although, thinking about it again, if you told me I could go to Denali again next year for free and I had spare time to take, I probably would say yes. It so beautiful there, and it was the most unforgettable experience I’ve ever had in my life.

Would you rather drive the Wild Atlantic Way along the west coast of Ireland or the North Coast 500 in Scotland?
I’ve got a Scottish boyfriend so I have to say Scotland. Otherwise I’m in trouble 😉

Would you rather sleep in a room with a Tarantula or a Snake?
Oh gosh, no tarantulas! Snakes somehow don’t bother me but creepy crawlies is my biggest fear. Though strangely it’s in line with fear of dots that I have (don’t ask why, but it’s a real thing called trichophobia). Funny enough I used to have a tarantula and two corn snakes at home. I hated the tarantula, but it was pretty harmless, it seemed to be sitting in one spot for a month without moving at all. Snakes were more active. At one point they both escaped. My housemate found one in her room and the other one in her kitchen cupboard. You can only imagine how pleased she was.

Would you rather visit Big Major Cay, an uninhabited island in the Exuma area of the Bahamas known as Pig Beach to swim and play with the pigs or the popular resort of Okunoshima, known as Rabbit Island in Japan, to play with the rabbits?
I would definitely go for Big Major Cay and the pigs. It’s seems kind of cool, plus … you cannot say no to a beach in Bahamas.

Would you rather your final European Summit was Carrauntoohil in Ireland followed by a weekend in Dublin or Kékes in Hungary followed by a weekend in Budapest?
Dublin is a cool place and I love Irish people, so I wouldn’t mind ending it there, but spa parties in Budapest would definitely be high on my list. Thinking about it … maybe you actually gave me a good idea 🙂

Would you rather have Dwayne “The Rock” Johnson or Will Smith join you and your Meet Up group for your next summit?
Will Smith, he’s a funny one, and I love all his movies. It looks like you aimed for comedy choices though, in which case, if I could change that, I would go for Ricky Gervais … even if I had to carry his fat ass up a mountain. He’s a legend to me. Absolute hero in a comedy space.

Would you rather attend Burning Man Festival in Nevada USA or Coachella Valley Music and Arts Festival?
BURNING MAN!!! I’ve been meaning to go there for so many years but never really got the chance. My hopes are still high though, so hopefully you’ll see me there soon.

Would you rather only be able to finish 47 out of 48 mountains and never complete the crown of Europe but you get unlimited free flights around Europe for life or be able to summit the 48th mountain but from then on you can only fly with Ryanair?
That’s a nice question, though I would rather complete all of the 48 peaks. There is something about the accomplishment that gives me the kick. “Climbing” the highest peak of Belgium or Lithuania on its own is not exactly an accomplishment, as they are tiny, but “climbing” them as part of the whole project is something that makes them exciting. For that reason, I would need to complete all of them. Ryanair is actually not that bad … maybe you’ve just caught me at the wrong timing though. My flight to Tirana to climb yet another peak has just been moved by 3 days. Pretty useless flight then given I was going there for 3 days only. And no, it wasn’t Ryanair.

Read more at To Live To Travel

Would You Rather? With Geena From Bartender Abroad!

Would You Rather? With Crystal from Adventures with Crystal!

Would You Rather? With Dan from Dan Flying Solo!

Would You Rather? With Jamie From Jamie Morgen Phillips!

Would You Rather? With Steven & Jazmin from Travel To Blank!